Additive Manufacturing (AM) is a process by which you can create your 3D data model into a real physical model (item). You need to create a 3D model first by using any CAD (Computer Aided Design) software. Once the 3D model is ready then you can use a 3D printer to make that model into a Real physical model, the product material could be plastic, resin, metal, paper and many more. Basically, the 3D printer creates layer by layer of the 3D model to create the actual Physical product.

No Need of the assemblage

Modeling: Additive Manufacturing always starts with a 3D model generated by CAD software (Catia, Solid edge, etc.). This file will serve as a blueprint for the machine, by setting perimeters and guides for the material as it lays down layer upon layer. 3D models are then converted into printed software readable format i.e. (.STL format). 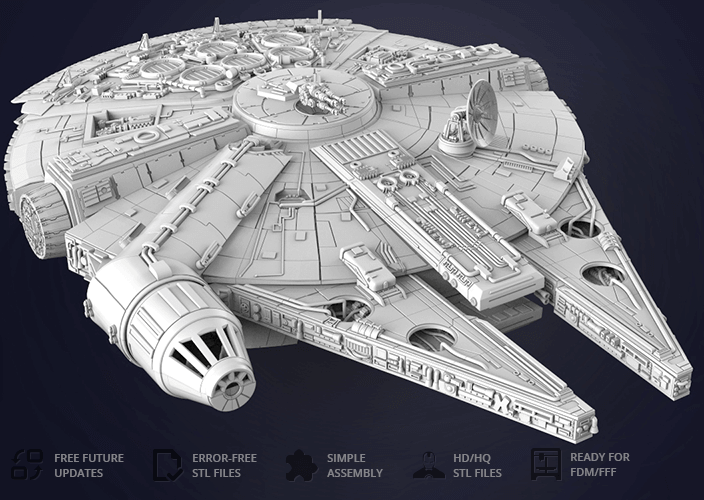 Printing: The 3D printer uses the information of the 3D file to create very thin layers of material, often thinner than 150 microns. Once all the successive layers have been created, the Additive Manufacturing process is considered done. Depending on the technology itself, the form of the raw material can vary from solid filaments, powder, to liquid. 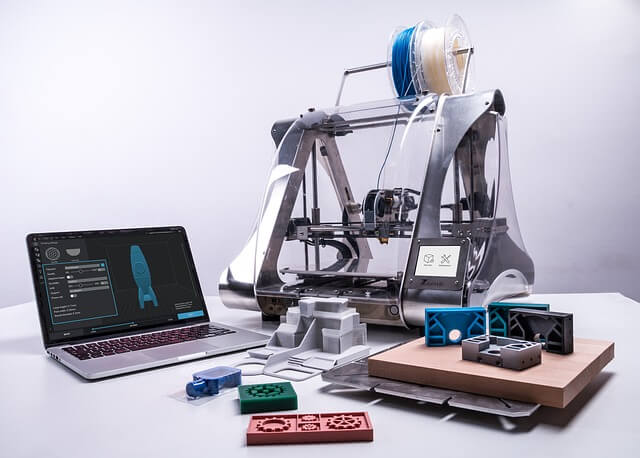 Selective Laser Sintering (SLS) technologies are capable of manufacturing with multiple materials from polymers to metals, thanks to the application of a laser. Selective laser sintering makes it possible to print functional objects without using an intermediate binder or having to go through an assembly stage. The printing is done layer by layer, from fused powders to the temperature generated by a CO2 laser.

Direct Metal Laser Sintering (DMLS) is a game changer in 3D printing of metals. This is one of the world’s most advanced manufacturing technologies when comes to metal printing. This method very fine granular Aluminum or Titanium powder is used to produce the parts.

Electron Beam Melting (EBM) is a process where raw material (metal powder or wire) is placed under a vacuum and fused together from heating by an electron beam, in which metal powder or filament is completely melted by a concentrated beam of electrons. Production in a vacuum chamber ensures that oxidation will not compromise highly reactive materials like titanium. Vacuum production is also required so electrons don’t collide with gas molecules.

Fused Deposition Modeling (FDM) consists of the printer platform, a nozzle (also called as printer head) and the raw material (typically production-grade thermoplastics) in the form of a filament. At the beginning of the printing, the raw material is extruded as a thin filament at the outer edge of the part and then inner edge through the heated nozzle. It deposits at the bottom of the printer platform, where it solidifies. The next layer that is extruded fuses with the layer below, building the object from the bottom up layer by layer.

Rapid Prototyping: Models and parts for research can be easily manufactured whenever required. Easy to make changes in the models as per the research proceeding.

Food: Cornel Creative Machine Lab is making food items such as chocolates, candy, pasta, pizza using the AM process since 2012.

For More Info on it 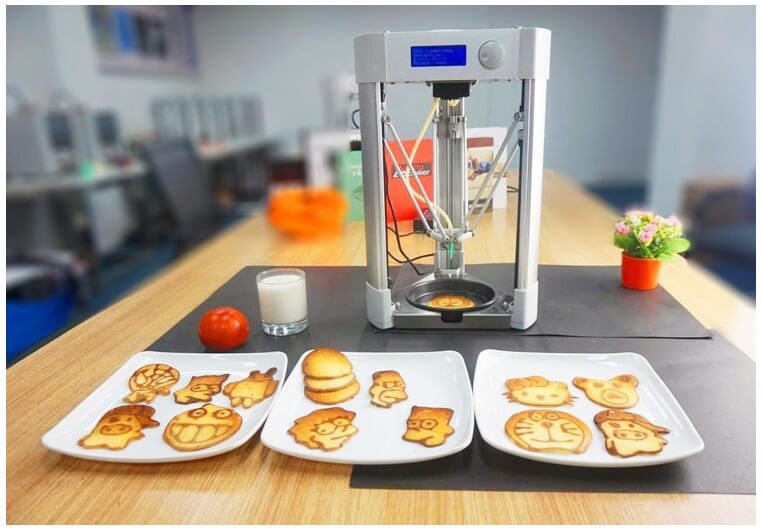 Apparel: Products such as shoes, clothes, and eye wears are being manufactured using the AM process. Nike is using this technique to produce football shoes for players of the American football team. Vanessa Friedman, fashion director, and chief fashion critic at The New York Times says AM will have a significant value for fashion companies down the road, especially if it transforms into a print-it-yourself tool for shoppers. For Example, Below Nike Sports Shoe was Printed Using 3D Printing Machine

Aerospace regulation: In the United States, the FAA has anticipated a desire to use AM techniques and has been considering how best to regulate this process. The FAA has jurisdiction over such fabrication because all aircraft parts must be made under FAA production approval or under other FAA regulatory categories. In December 2016, the FAA approved the production of a 3D printed fuel nozzle for the GE LEAP engine. Aviation attorney Jason Dickstein has suggested that additive manufacturing is merely a production method and should be regulated like any other production method. 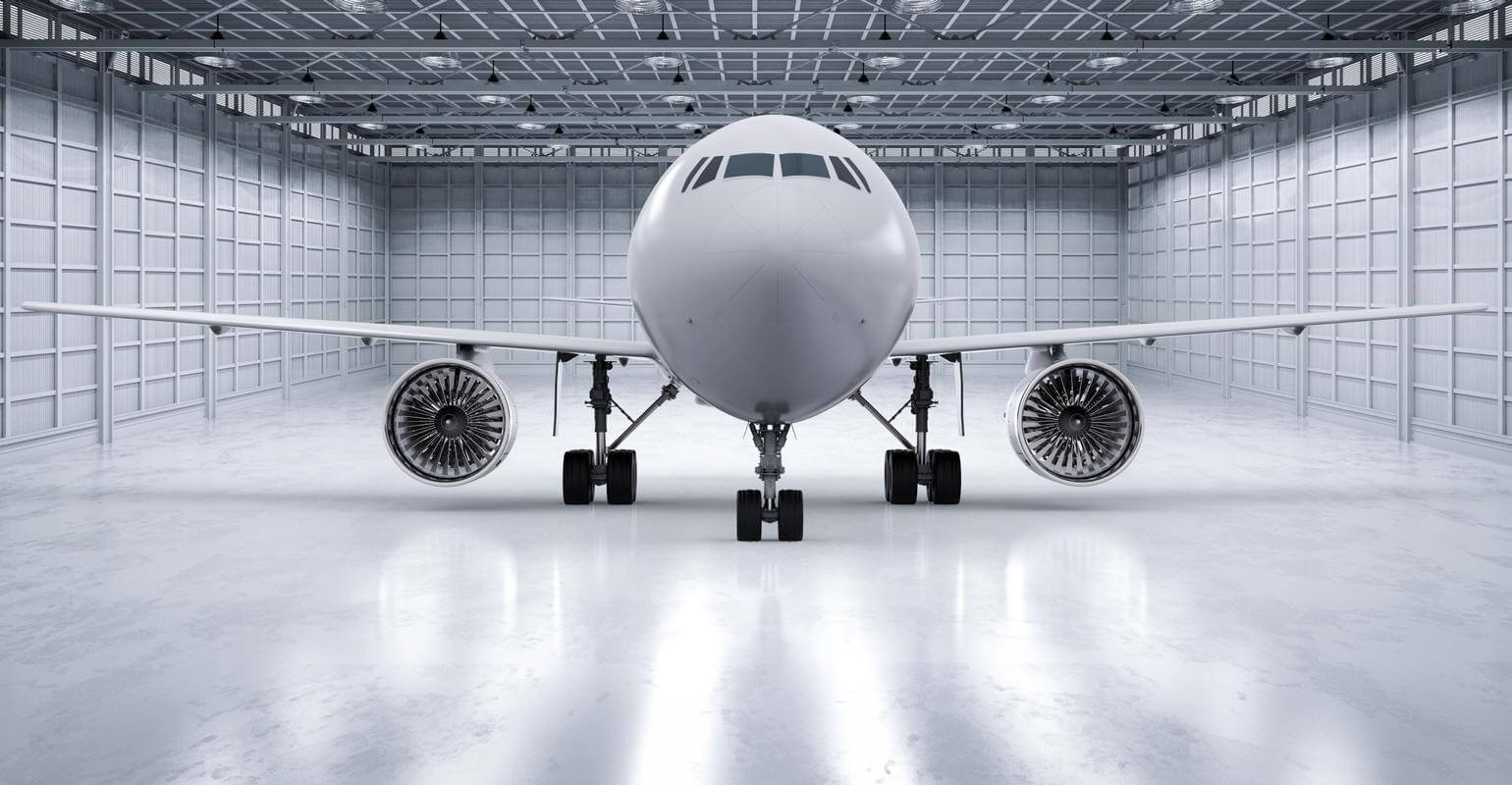 Vehicle: In 2010 Urbee produced the first car using this process, in 2014 Koenigsegg produced supercar with AM produced mechanical parts in it.

Firearms: Defense arms such as guns, rifles and safety equipment has also been manufactured by AM process. In 2012, US-based group “Defense Distributed” designed a working plastic gun that could be downloaded and reproduced any anyone using AM process. In 2013, “Solid Concepts” based in Austin, Texas, USA succeeded in manufacturing first working metal gun.

Medical: Nowadays medical devices, specific implants, hearing aids, dental products, and pills are being manufactured by AM. During October 2014, a five-year-old girl born without fully formed fingers on her left hand became the first child in the UK to have a prosthetic hand made with 3D printing.

Till now more than 400 hands have been transplanted by E-NABLE. In August 2015, US FDA (Food and Drug Administration) approved 3D printed pills which allow very porous pills to be produced, which enables high drug doses in a single pill which dissolves quickly and can be ingested easily.

Bioprinting: Bioprinting refers to manufacturing artificial biological organs and body parts capable of working like original ones. In this process, layers of living cells are deposited onto a gel medium or sugar matrix and slowly built up to form three dimensional structures including vascular systems.

The first production system for 3D tissue printing was delivered in 2009, based on NovoGen bioprinting technology. In 2013, Chinese scientists began printing ears, livers, and kidneys, with living tissue. In 2014, researchers at the University of Hasselt, in Belgium had successfully printed a new jawbone for an 83-year old woman.

Education and Research: Scientific instruments, replicas of historical items, internal organs of the human body, 3D models of molecules and chemical compounds can be printed in classroom laboratories to study them.